Zolman Restoration was called into action to respond to an emergency fire at a high-end retail mall in Troy, Michigan after a first-floor restaurant inside the mall had its vent ductwork catch fire. After the ductwork caught fire, it traveled up the hood vent of the restaurant to the power vent located on the roof. Due to heat and damage to the roof’s fans and equipment, the roof began to compromise, setting off the third floor’s fire suppression head. Before any more damage could occur, the local fire department was able to contain the fire using 10,000+ gallons of water.

The Z-Team responded quickly to the fire, with about two dozen team members ready to begin the restoration process. The core focus for the team on the first night was to begin water extraction on all three floors of the mall and place air scrubbers to remove the odor and smoke throughout the mall. With the Z-Team’s quick response and ability to extract the water and smoke smell caused by the fire, the mall’s common areas were able to re-open on time the following day.

After the initial phase of water and odor extraction was completed, the Z-Team shifted focus to the necessary demolition work that needed to be performed. Most of the water damage occurred in the back corridors of the mall that are shared by 20 of the mall’s tenants, and in mechanical piping areas that included gas pipes, water pipes, and HVAC ducting.

With after-hours work shifts from 8PM-8AM, the Z-Team began to perform the demolition work caused by the water and fire damage in areas that extended up to 18 feet in the corridors. Due to gas pipes, water pipes, and HVAC ducting in the halls, the Z-Team had to carefully coordinate with impacted tenants to work around these mechanical areas and not interfere with their business operations. Although this slowed down the demolition process, the Z-Team overcame these challenges due to careful attention to detail and strong communication skills with trade partners to get the right equipment in at the right time.

With most demolition completed, the Z-Team began to transition into the project’s deconstruction or selective demo phase. The selective demo process consists of carefully opening damaged chassis embedded in tenant spaces to replace all the damaged piping and ducting. This process is strategically selective in timing to work around the tenant spaces and not cause any delays in their service to their customers.

As demolition and selective demo wrap up, the Z-Team has started the changeover from their mitigation team to the reconstruction team. This transition includes working with trade partners to review materials and equipment needed, code upgrades to the mall, scheduling reconstruction services with the mall tenants, and providing reconstruction drawings for the city of Troy. Although dealing with unforeseen fire and water damage is something no client wants to go through, the Z-Team’s proven process has allowed clients not to worry, as the Z-Team is up to the challenge of restoring their space with minimal business interruption. 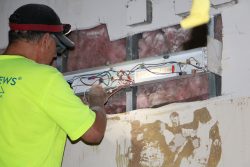 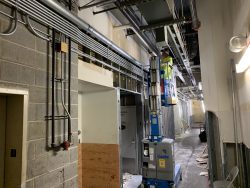 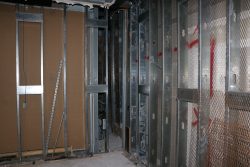 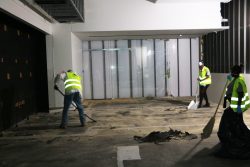 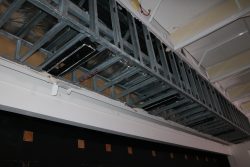